On the 14th of September 2013, we were invited guests to a very special celebration – the wedding of the son of our old neighbour from Koronivia Road, the home of my friend Sabita.    I have never been to an Indian wedding before, and it was such a great privilege to be invited.

I will let the photographs speak for themselves, and here are a few of my observations. 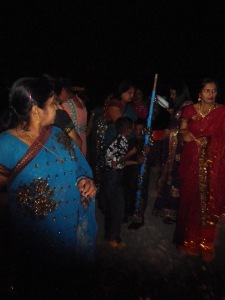 At the beginning of the evening, as guests are being seated in a temporary structure set up for the occasion, the ladies leave the venue, and walk together to the nearest cross roads.  They carry sweets on their heads, and eat and talk all the way.  At the cross roads, they collect some mud, and say prayers, and take it back to the wedding to be prayed upon and to bless the couple.  This symbolizes the cross roads that the couple have reached, and the decisions that have led them to their decision to marry, and all of their many future decisions and cross roads that they will inevitably face as a couple.  They then return to the venue, where the bride stands beneath a decorated canopy with a basket on her head and dances as the women come and give small cash gifts.  You have to hold the gift over the basket, wave your hand three times, and then place it in.

After that, the mother of the groom (the hostess also) stands in the same canopy, and the other mothers and grandmothers bring bowls of food prepared for the occasion, wrapped in colourful sulus and present them to the mother.  They receive a dance from her in return.  The last to make the presentation is the couple to be married.  The mother each time pours a little blessed oil on each bowl.

There were two long trestle tables set up, and people sit and eat, and then make room for the next guests, so that there is eating almost all night long.  The men and boys are completely responsible for food service.  When you sit down you are given a plate and a cup, and boys come with bowls of food, and serve little bits of curry and roti, and dahl over and over until you are sated.  This is the only time I have seen Indian men involved in food, and was told that they only do it at the wedding. 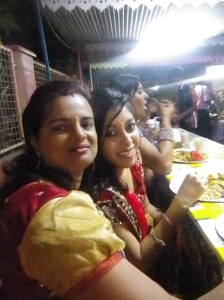 The bride and Sham’s daughter

The women all wear saris or salwar kameez (dress with tight pants under and a veil) and the room literally shimmers with the beading and sequins.  The way it lights up the faces of the women is incredible.  Women who I normally see farming or serving in the store are transformed literally into godesses.

There are musicians too.  If you like the song, you also make an offering to the singer of $2 or $5 by waving it over his head three times, then putting it in his bowl.  It is best to give a note rather than a coin.

Recently, Fiji got rid of the $2 note, and replaced it with a coin.  This has caused an enormous problem in the Indo-Fijian community, as now the smallest note is a $5 note, and to give that at a wedding or funeral is a burden on many families who live on $60 a week.

The entertainment is always varied and often multicultural at Indian events.  At the wedding, the girls danced, and they had a female impersonator from the Solomon Islands who did a wonderful dance in hula style.  His half-man-half-lady (as they are called here) friends came to collect

him at the end and were welcomed.

Everyone is catered for, my friends Sham and Nilesh who are both in wheelchairs after a car accident many years ago – Sham is a very successful insurance agent, and Nilesh has just found a career as an artist supported by social workers from USP; Nilesh’s father who has just had two toes amputed from diabetes but always has a joke about it (Fiji has

the number one rate of amputation from diabetes in the world); the transvestites; everyone!  My friend Sivnila who is fifteen years old and does our lawnmowing.  He attends school and works the 8 acre farm with his mother, and makes money selling vegetables and lawnmowing to support the family as his father is bedridden after a heart attack.  Jason and Sonam, whose father has been lying in bed at the back of their house with body weakness for many years, and whose mother, my friend Agnes (a gardener) has now joined him after a severe stroke.  She is now almost immobile as there is 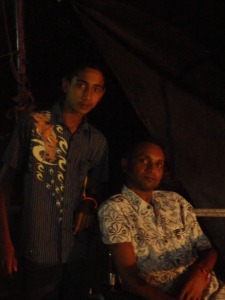 very little treatment here except for massage and family visits.

There is always a place where the men can be served Kava (yaqona) but there is no alcohol.  Ladies do not drink at all, except for during the meal, and it is only cordial.  Maybe it is so difficult when so many ladies might need to use the bathroom with saris so they just avoid liquid intake.  I am not sure, but I am always struck by the difference in culture.  In my culture, it is always polite to offer a drink of some kind to guests, but not here, so I often am very thirsty at events I attend!

The young men do go and buy beer, but they do not drink it at the wedding, they will drink it outside, and Nishant and Sanila’s shop stayed open til midnight especially.

The atmosphere is electric and calm at the same time.  There is a sense of family that runs right through the community that brings a deep contentment.  I am humbled to be included in that large family, and love dearly my family on Koronivia Road. 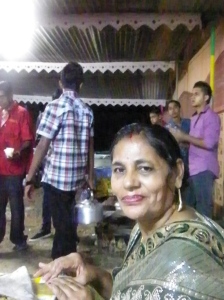 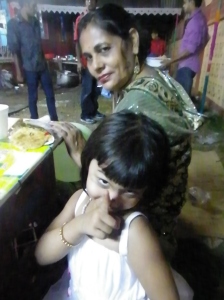 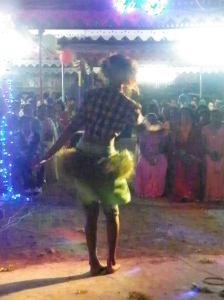 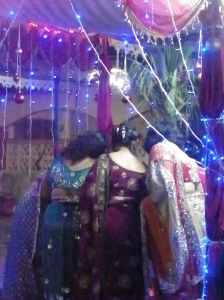 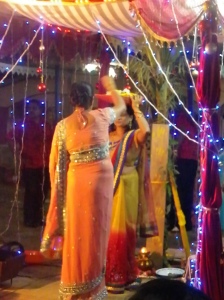 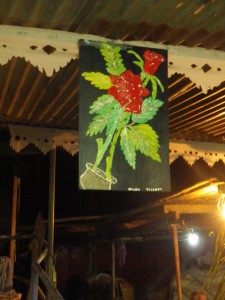 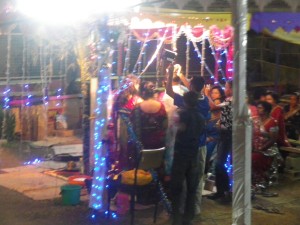 The groom’s father, my father in law, my husband

Roro balls served with braised bele and cucumber, and fresh corn in our back yard

If you come to Fiji, whether your hosts are iTaukei (indigenous) or Indo-Fijian, make sure that you ask them if it is ok if they serve you the normal food that they eat, as so many Fijians really do believe that you won’t like the food at all, and are really not sure what you will eat at all, as they believe that there is nothing in the cuisine that you will like.

dinner at our place on a school night – mashed dalo, braised beans, and other goodies

Here is a little recipe which can be easily adapted if you want to try it.  These balls are really light and delicious and are the perfect quick fix if you are having friends over for drinks at the last minute, or have to take something to a party.  It is my husband’s only concession to Kava (yaqona – pronounce yangona) drinking and our mix of cultures.  Traditionally, food is not eaten at all until all of the Kava is finished and the guests are gone.  In fact, it is traditional that the male guests do not eat no matter what kind of feast is prepared, but you must pack a meal for them to take home.  It is a real panic if you have inadvertently run out of yoghurt containers for the purpose!  Anyway, I digress: if my husband invites people home, he asks if I can cook this quick snack, and serve it while the kava ceremony is in progress, which is normally several hours.

Dom with his dinner

This snack is served at roadside food vendors all over Fiji (here, they are called Bean Carts).  Roro is actually the name for the green dalo leaf which looks like an elephant ear, but the balls are not made with roro.  If you do try and use roro, you will find that the balls make your throat itch, as roro needs to be cooked for a long time to take away that side effect.  Indo-Fijians use mothe which is kind of like English Spinach, but I use bele as a substitute.  Bele has a bigger leaf, and is related to the hibiscus plant, and for me at least is much easier to grow.

The only thing you have to do is make sure that you have some pea flour (besan flour), normal flour or plain flour, and oil in the cupboard just in case.  The rest you can wing it.

This recipe is courtesy of Mrs Kumar of Shane Cafe in Nausori, Fiji, but I have adapted it slightly as I like to use the coconut scrapes (or fresh grated coconut) as many families simply throw it out.

All of the fresh ingredients normally come from our garden, and you can use your common sense and substitute for other stuff you have lying around.

How to do it: Don’t labour over it, as it is really very quick